We were just in the process of learning how to Zoom and record videos when the pandemic hit and we had to close our building in March of 2020. Initially we used Zoom at a members house to record various pieces of our service. We then gave the recording to one of our members who pieced together a full service by adding music and piecing together the different recordings. We would then post the service to YouTube and later also posted it to Facebook.

We were fortunate to get a Grant from NTUUC as well as donations from friends and members that then allowed us to buy the equipment necessary to do it right. We received a total of just over $12,000. With this money we upgraded the equipment in the Chapel, added the cameras, redid and added some wiring, and practiced. We went live in the Chapel and live on Zoom with our new setup in July 2021. We still post our service to YouTube and Facebook by Monday following the Sunday service.

This is where our money went and what we did with it: 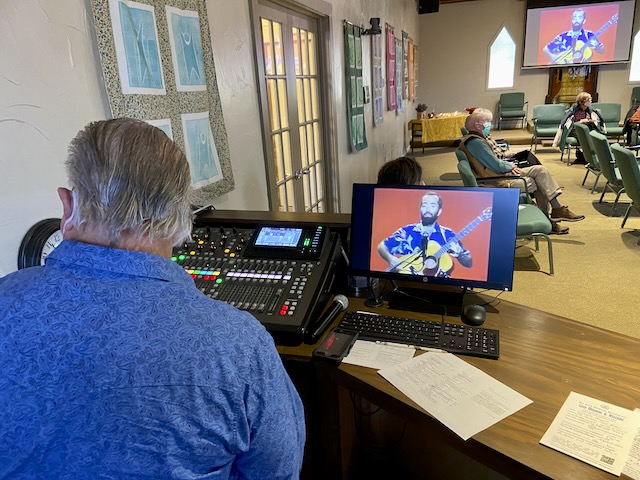 Sound: We had an old Behringer X1222 analog sound mixer and upgraded to a digital Behringer X32 Compact mixer ($1525). Our old system was almost maxed out on input ports (8 XLR ports) and the new unit supports 16 XLR input ports and digital stage boxes for a max of 32 input ports. We bought an 8 port Behringer digital stage box ($439) to support our music area which right now is a piano and singer mic. The stage box connects to the digital mixer with a special 100′ shielded Cat5 cable ($80).

Our old Yamaha piano was having issues so we replaced it with a new digital RD88, 88 key stage piano ($1300) and cables to connect it to the stage box.

We have 5 older Shure BLX4R wireless receivers with BLX1J10 headsets. These connect to our new X32 digital recorder using XLR cables. We bought a new digital dual wireless receiver and 2 new wireless headsets ($1530). The sound quality is noticeably better with the new wireless units and it has fewer problems so we use it at important positions. We use the older analog wireless as needed to fill and always set up one of the headsets to act as a crowd mic until we figure out how best to do this and what equipment we need.

Our Chapel has four ceiling mounted JBL Control 5 speakers. One of them was going bad so we bought 2 of the same ($419 a pair). We replaced the two matching speakers. So far the other two are behaving. The X32 also connects to a Crown amplifier which sends sound to the 4 Chapel speakers. 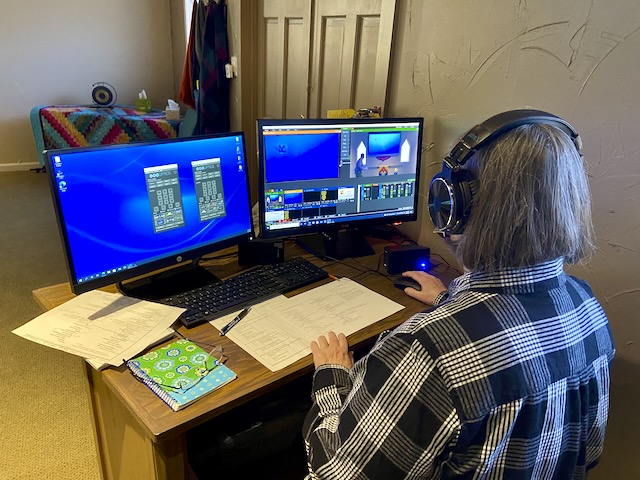 Video: We have 2 cameras. Both are from PTZOptics and are the 20X, SDI, POE model ($1550 each). These cameras have an app (free) that allows us to setup and manage the PTZ functions and save different views as presets. We bought a very fast Dell computer (Dell XPS 8940, $1082)) with the latest intel graphics chip (UHD630) but the inbuilt graphics card couldn’t keep up with 2 cameras and the graphics would skip at times. We had to add a Geforce 1050 graphics processor card ($367) and now have no issues. We setup one camera on the wall directly in front of the pulpit (about 25 ft distance). The other camera is a side view of the pulpit and speaker. Both camera connect using Cat5 and are powered over internet (POE).

Projectors: We had two old projectors (inexpensive Epson) that were used to show powerpoint, videos, and MP4 files on our two screens. They were ok live but had serious quality issues when we tried to record what was showing on the screens with our cameras. Due to a generous donation from one of our members we bought 2 new Sony VPLCWZ10 laser projectors (on sale for $1550 each). This solved our problem.

Software: We started with OBS recording software (free) but it had some issues so we switched to Vmix (only runs on Windows) and that resolved our issues. We bought the Vmix HD version for $350. We went to this version so we could add more that 4 inputs (the free version has a 4 input limit). We use inputs to allow us to add to our recording, other videos (use this for our intro and trailer video) and also overlays that appear on the screen (use this for showing the words for the affirmation and candle extinguish words). Vmix also allows us to easily switch between cameras with slow or fast fades or switch from camera to canned video or other inputs.

The cameras connect to the same gigabit switch as does our Vmix Dell PC. The X32 digital mixer connects to the Vmix Dell PC using a USB cable.

Vmix also outputs what it is capturing to NDI. We run NDI Studio Monitor (free in the NDI tools download) on other PCs in the building that are attached to the gigabit network so they can see the live service. On one of our PCs we run Zoom and share the NDI window. For now this is our live stream for our remote friends and members to watch the service.

Running the Service: The Worship Team creates a Sunday script and a powerpoint presentation that steps through the different sections of the service (prelude, affirmation, readings, music live or on video, a gap for the speaker, etc..). This powerpoint is run on a 2nd PC that connects to the X32 digital mixer with the mic out port and connects to the 2 projectors via HDMI and a Y splitter to run both projectors as second monitors. The AV sound technician runs the sound board, lighting, and the powerpoint. A second AV technician runs the Vmix PC and the two cameras.

We have 3 smart TVs in our building that are each connected to their own PC with HDMI. The PC is connected to the network with Cat5 and all PCs are connected to gigabit switches. Each TV has NDI Studio Monitor installed. When we run this we can see and hear the NDI output from the Vmix computer. Each of these PCs use the connected TVs as a second monitor to show the service over NDI.

We have a slightly different setup to livestream our service over Zoom. In one of our rooms we run Zoom on the host PC and NDI on the TV. We share the NDI window on Zoom so that our participants can watch the live service. Unfortunately we have to have a dedicated technician observing Zoom on the host PC just in case we get Zoom bombed – so far we have not had any Zoom bomb issues.

It takes 3 technicians to run our Sundays.

Here is a diagram of our setup in the Chapel. It’s a 3 page PDF file so be sure to view all 3 pages.

Z – Connects the Chapel to our Zoom setup in another room