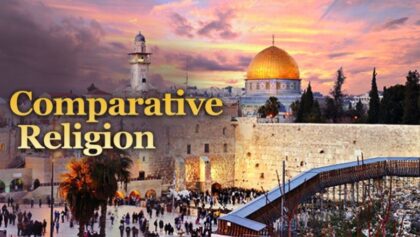 Dr. Charles Kimball is Presidential Professor and Director of the Religious Studies Program at the University of Oklahoma. A graduate of Oklahoma State University, Professor Kimball holds an M.Div. from The Southern Baptist Theological Seminary and a Th.D. from Harvard University in Comparative Religion with a specialization in Islamic studies. An ordained Baptist minister, Professor Kimball is a frequent lecturer and an expert analyst on issues on the Middle East, Islam, Jewish-Christian-Muslim relations, and the intersection of religion and politics in the United States.  Professor Kimball has visited the Middle East more than 35 times and has worked with Congress, the White House, and the State Department. Professor Kimball is the author of four books, including When Religion Becomes Evil (named one of the Top 15 Books on Religion for 2002 by Publishers Weekly) and Striving Together: A Way Forward in Christian-Muslim Relations.
This is a series of 24 lectures of 30 minutes each. We will watch and discuss the remaining 13 lectures.
Oct 23 – From Birth to Death – Religious rituals
Oct 30 – Daily, Weekly, Annual Religious Rituals
Nov 6 – Ritual Sacrifice in the World Religions
Nov13 – The Human Predicament – How to Overcome It
Nov 20 – The Problems of Sin and Forgetfulness
Nov 27 – Breaking Through the Illusion of Reality
Dec 4 – The Goal of Religious Life
Dec 11 – The Way of Faith and the Way of Devotion
Dec 18- The Way of Action and the Way of Meditation
Dec 25 – Christmas
Jan 1 – New Years Day
Jan 8 – The Way of Mistics
Jan 15 – The Evolution of Religious Institutions
Jan 22 – Religious Diversity in the 21st Century
Section Navigation