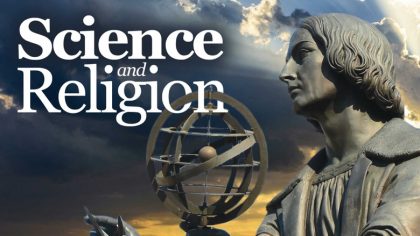 Starting in February and continuing through April, the Adult Forum will explore The Great Courses Series Science and Religion with Dr. Lawrence M. Principe.

The course overview:  Two crucial forces, science and religion, helped shape Western civilization and continue to interact in our daily lives. What is the nature of their relationship? When do they conflict, and how do they influence each other in pursuit of knowledge and truth? Contrary to prevailing notions that they must perpetually clash, science and theology have actually been partners in an age-old adventure. This course covers both the historical sweep and philosophical flashpoints of this epic interaction.  Professor Lawrence M. Principe unfolds a surprisingly cooperative dynamic in which theologians and natural scientists share methods, ideas, aspirations, and a tradition of disputational dialogue.

The Forum meets at 10 AM.  Participants are invited to join the congregation for the Morning Assembly – live in the chapel and streaming on Zoom using the same meeting ID.

For the month of February:

For the month of March:

For the month of April:

Lawrence M. Principe is Drew Professor of the Humanities at Johns Hopkins University. Professor Principe earned a B.S. in Chemistry and a B.A. in Liberal Studies from the University of Delaware. He also holds two doctorates: a Ph.D. in Organic Chemistry from Indiana University, Bloomington, and a Ph.D. in the History of Science from Johns Hopkins University. In 1999, the Carnegie Foundation chose Professor Principe as the Maryland Professor of the Year, and in 1998 he received the Templeton Foundation’s award for courses dealing with science and religion. Johns Hopkins has repeatedly recognized Professor Principe’s teaching achievements. He has won its Distinguished Faculty Award, the Excellence in Teaching Award, and the George Owen Teaching Award. In 2004, Professor Principe was awarded the first Francis Bacon Prize by the California Institute of Technology, awarded to an outstanding scholar whose work has had substantial impact on the history of science, the history of technology, or historically-engaged philosophy of science. TProfessor Principe has published numerous papers and is the author or coauthor of three books, including The Aspiring Adept: Robert Boyle and His Alchemical Quest.