Download the Morning Program here or scroll below and read the morning program without having to download it.

Of his remarks, Dr. Sinkford writes:

Love Calls Us On: Our national narrative and our faith’s story present us as both innocent and wise. The facts on the ground tell a more complicated story. What does faithfulness require when the wisdom of the past seems to be failing? What is love calling us to do in these divisive times when innocence is no longer an option?

About our guest minister 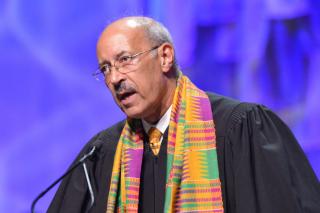 Mr. Sinkford, spent his childhood in Cincinnati and became a Unitarian-Universalist when he was 14 years old. He wrote, I claimed the church when as a young black man, I walked into First Unitarian, Cincinnati, and found a religious community where I could be fully myself. Though he left in the 1970s believing that the Universalists had retreated from engagement with racial justice. He returned to find a religious home for his two children. He was ordained in 1995.

In 2001 he became the seventh president of the Unitarian Universalist Association of Congregations.[3] In 2003, Sinkford said the “main goal of his presidency of the Unitarian Universalist Association was to reclaim a “vocabulary of reverence” within the association; he had been struck by the fact that the association’s Purposes and Principles “contain not one piece of traditional religious language, not one word”; it includes generalizations about human dignity, justice and “the interdependent web of all existence,” but does not do much “to capture our individual searches for truth and meaning.” Sinkford has previously considered himself a “card-carrying atheist” who in 1997, after his comatose son had recovered, began to develop a “prayer life centered on thankfulness and gratefulness to God.” William F. Schulz who had served as UUA president from 1985 to 1993, supported Sinkford’s efforts to use a “wide lexicon” of religious language, and had “long been critical of the position of some humanists that would sanctify secular language and lock us into a calcified rationalism.”

Since 2010, he has served as the senior minister for the First Unitarian Church in Portland, Oregon.