In 1966 Gene Roddenbery introduced the world to Star Trek, a series that continues to light up our imaginations almost 60 years later. I avoided watching the show for one reason: the word Frontier. Do we really need another TV show praising the evils of colonization, only in space?  I recently gave the show a chance and realized that my assessment might have been wrong. So, I ask two questions: What if frontier was redefined?  And how can the UU faith lead the way in navigating this frontier? 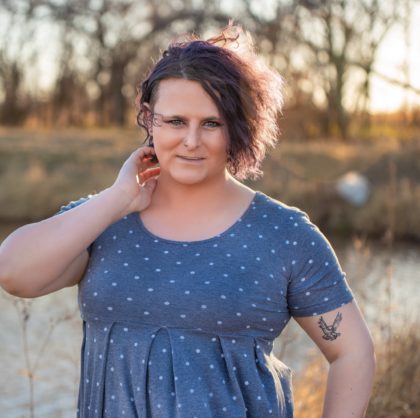 Ashley Newlin (she/her) is entering her fourth and final year as a Masters of Divinity student at Brite Divinity School. Where she just completed her 1 year term as Moderator of the Brite Student Association (BSA). During this term BSA implemented a mentoring program, which helped connect new students connect with students further along in their studies to help them transition into the seminary environment. As well as her continued work on structurally reforming the student government to be more representative of all student groups on campus, which is due to be completed by August of this year. She also continues to serve as a Resident Assistant at Leibrock Village, which provides affordable housing for graduate students at Brite and TCU. Before beginning her seminary career at Brite she served as a Youth Pastor in a couple of Nazarene Churches in Oklahoma, as well as serving as a Child Welfare Specialist for Oklahoma Department of Human Services. Some of her hobbies include playing guitar and playing rugby.