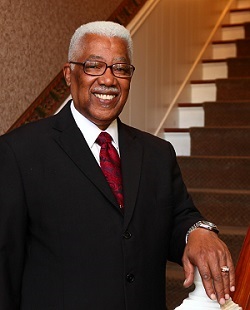 Memory is an essential part of consciousness and places embody our memories.  Old buildings are like memories you can touch.  However, in order to experience this connection, we must first know of its history.  On this last Sunday of Black History Month, we welcome Funeral Director James E. Smith who will speak of his 40 years at James Smith Funeral Home For Blacks, the only funeral home open to African Americans, along with giving us a glimpse of what it was like to live in this old, stately home.

James is a native Denisonian and began working with funeral homes in Denison/Sherman at the age of 13. He is a graduate of Terrell High School in Denison and Commonwealth College of Mortuary Science in Houston, Texas. James is a licensed Funeral Director and Embalmer in Texas since 1970 and in Oklahoma since 1996. James has 46 years of experience as a funeral professional. He has been married to his wife Barbara Kinney Smith for 52 years.  They have three children and six grandchildren.