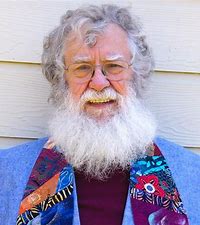 Mark Twain said, “Faith is believing what you know ain’t so,” and we know from that that he was thinking like Unitarians and Universalists had always thought, except we would then question that kind of faith! And when you start questioning, you become a heretic, a word that means “choice”, butt really means WRONG choice. I will argue that our Founding Fathers weren’t Christians but heretics and Unitarians, the Pilgrims heretics from the Church of England  which were heretics from Catholicism. Emerson was a heretic from Unitarianism! And let’s talk about the difference between Arianism and Socinianism – it was a huge debate in early Unitarianism!

About our Sunday speaker:  Rev. Art graduated from Lancaster Theological Seminary with a Masters degree in Divinity in 1987 and was ordained in 1988.   Art ministered to seven UU congregations during his active ministry, including 15 years at the First Unitarian Church of San Antonio.  He retired in 2015 and moved back to San Antonio.  He now occasionally preaches at our church and at churches in the area.