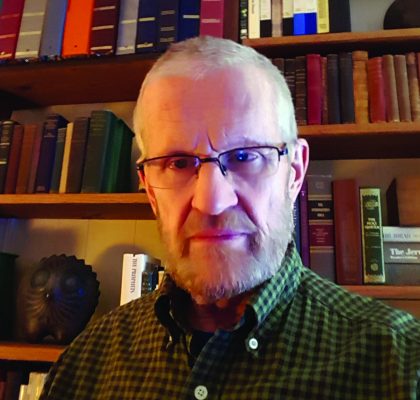 A look at three points in American History from 1619 when the first African slaves arrived to 1919 when the largest deportation of immigrants from these shores took place and to 2019 where questions of who are citizens, who are immigrants, who belongs and who decides still plague us.  Ponder this fact of history: without the idealistic, strenuous and patriotic efforts of black Americans, our democracy today would most likely look very different – it might not be a democracy at all.

This assembly will include prayers for the Transgender Day of Remembrance.

The Rev. Strong, a sixth-generation UU, co-founded our congregation 22 years ago as a outreach ministry of Community UU Church in Plano where he served as minister.  After retirement and the death of his husband John, he relocated to Texoma and is an active lay-member of Red River UU’s where he is the lead coordinator for the Worship Team.

Strong grew up in Madison WI and received his BA degrees in Psychology and Spanish language from the University of Wisconsin, and his Masters of Divinity from Starr King School for the Ministry, part of the Graduate Theological Union in Berkeley CA in 1979. Over the next 30+ years he served UU congregations in ME, VA, MA, CA, AZ, WI and TX.