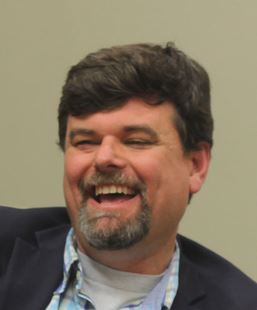 This talk will explore one of the most significant philosophical correspondences of the 20th Century comprised of a sustained 23 year dialogue (1922-1945) between UU philosopher Charles Hartshorne and Methodist philosopher Edgar S. Brightman. Hartshorne was one of the leading proponents of process philosophy, and Brightman was the most prominent Boston personalist philosopher of his time and had significant influence on the thought and worldview of Martin Luther King Jr. Topics of the correspondence include their views on knowledge, the nature of reality, social responsibility, justice, and peace.

The Rev. Dr. Mark Davies is the Oklahoma State Humanities Scholar for the Smithsonian Institute Museum on Main Street Water/Ways exhibit.  He is also the Wimberly Professor of Social and Ecological Ethics; Director of the World House Institute for Social and Ecological Responsibility; and Executive Director of the Leadership. Education, and Development Hub North America for the General Board of Higher Education and Ministry at Oklahoma City University where he has worked in both teaching and administration for 22 years.  He is a United Methodist minister and holds a Ph.D. in Social Ethics, from Boston University.

Mark is a regular contributor to various online publications, including “The Oklahoma Observer”, “The United Methodist Insight“, and “One World House” and he engages in advocacy and activism in the areas of peace, social justice, and ecological sustainability. Locally this is expressed through his work with the Human Community Network, which works to create non-violent systemic change for a just and flourishing human and ecological community through collaboration, education, innovation, and action. See www.humancommunitynetwork.org.

He and his wife Kristin live in Edmond, OK in the United States, and they have two teenage daughters.